Never Give Up – Don’t Listen to The Haters 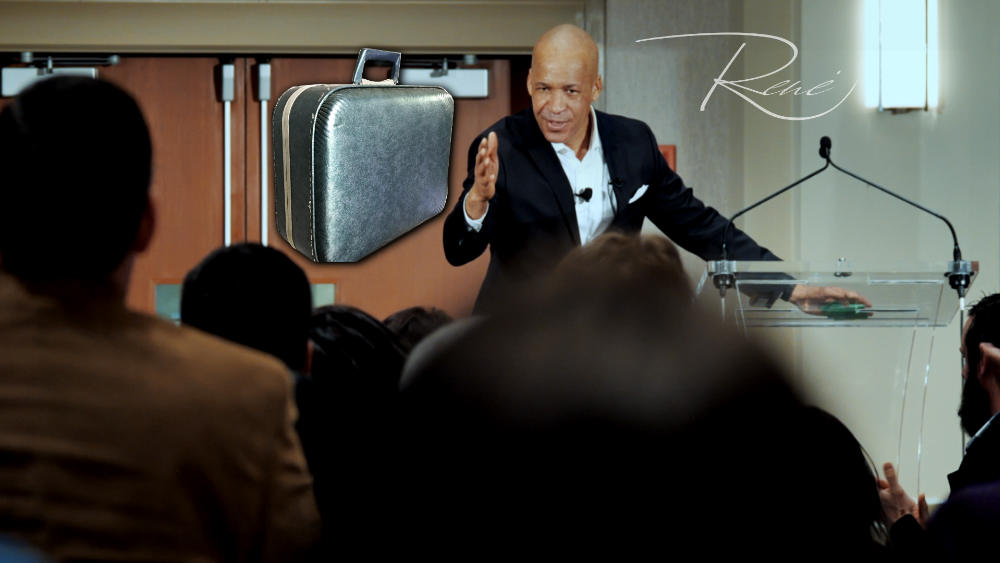 I came to the US broke, unable to speak English, with zero confidence in myself.

I had only $5, two shirts, and one pair of pants in the tiny suitcase you see in the picture. I was extremely shy and timid.

Because of my inability to speak the language, some people assumed I was stupid.

As a janitor at the 163rd Mall in Miami, I freaked out whenever I would see a security guard. I was afraid they might work for immigration.

One day, I saw a girl that I had gone to school with in Haiti. She looked the other way so that other people would not see her talking to a janitor.

I went to McDonald’s hoping to get a job to pick up trash in the parking lot. They turned me down because I couldn’t speak English. Go figure! I didn’t know the trashcans spoke English.

Later, I went to Total Bank in South Miami and begged them to let me wash their cars. After many rejections, one man said yes. I did a fantastic job!

Suddenly, I became the “car guy” in the parking lot. I remember looking up at the top floors in between car washes and saying to myself, “I would love to go up there as a janitor.”

I went to McDonald to get a job to pick up trash in the parking lot. I was turned down because I couldn’t speak English. Go figure! I didn’t know the trashcans spoke English.

Later, I went to Total Bank in South Miami. I begged the people to let me wash their cars. After many rejections, one man said yes. I did a fantastic job!

Suddenly, I became the car guy in the parking lot. I remember looking up at the top floors in between car washes and said to myself, “I would love to go up there as a janitor.”

Four years later I’m now in Atlanta. I managed to get at the Kmart warehouse loading boxes. One year later, I got my CNA (certified nursing assistant) license.

I worked as a companion for a Jewish man. After he died, his family help me get a job as a doorman at the Waverly Renaissance Hotel. I was there for 14 years.

As I was parking the cars, I would notice some motivational and business books in the back seats. I bought them and devoured every word on the pages.

One of them mentioned speaking for a living. I said to myself, “I want to try that speaking thing. Why not?”

I told a guy who was my supervisor that I was going to become a motivational speaker and write a book. Well, it turned out that he was a hater.

He said, “With your Haitian accent? Man, no corporation would pay to listen to you. You have no credentials.”

I told him I was not asking for his permission and approval to be a motivational speaker and author. God already approved me the day I was born.

However, his stupid remarks triggered a lot of doubts and fears in my head anyway.

Fortunately, I saw this motivational speaker on TV motivating people in this country. I said to myself, “Shoot! If Jerry Springer can motivate Americans, I can do it too.”

Fast-forward today. I am the author of three books. And one them won the Writers Digest Awards. Indeed, many Fortune 500 corporations have paid to motivate and boost the morale of their employees.

A few years ago, the Napoleon Hill Foundation booked me to speak at their annual event. Guess where that event was held?

At the McDonald’s Headquarters! Yep, the guy who couldn’t get a job to pick up trash at the parking lot of one of their stores in Miami.

Oh, by the way, the Chairwoman of Total Bank heard saw me on television talking about washing cars in the parking.

She called and invited to speak at their breakfast for the senior leaders.

Yep! The event was held on the very top floor. I’m having goosebumps as I typed these words.

I took the time to write this long post to inspire you and stir your soul. If you happen to be in a comfort zone, I want to disturb you and disrupt your complacency.

Don’t ever let the haters and losers predict your future. You don’t need their approval and permission. They are not your makers.

Instead, get rid of them. While you are at it, purge some so-called friends as well. Go on the journey alone if you have to. The thing is, you won’t be alone for too long. There are plenty of winners waiting to cheer you up. Don’t look back.

Finally, I’m not sure what’s the top floor for you. But, here’s what I am 100% sure of: With hard work, resilience, and positive expectancy, you are guaranteed to get there.